This article was originally published on the Orleans Hub here. 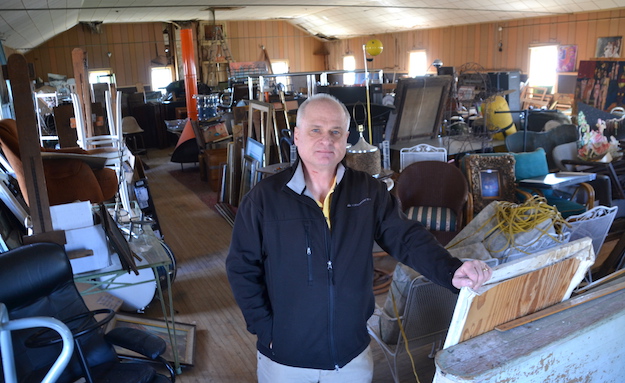 GAINES – When Robin Stelmach was a college student at Brockport about three decades ago, he would drive Ridge Road from Niagara County to Brockport. There were about 20 antiques businesses then.

Now there are only a few remaining. Stelmach’s business, Americana Unlimited Antiques, has been based in Gaines on Ridge Road for about 20 years. He is at the corner of Ridge Road and Route 279, a 9,000-square-foot building that used to be a stage coach stop in the 1800s and later served as a grange. 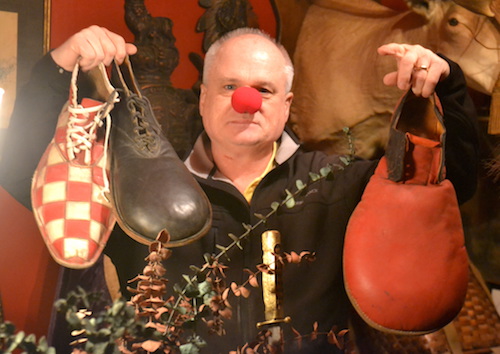 Stelmach, 53, has been in the antiques business since he was 8. It’s been his full-time profession since 1990. He doesn’t do any sales on-line.

“Most of my business is word of mouth,” he said today. “Most of it is out of state.”

Stelmach can identify almost any household object, any artifact that may have been stored away in an attic for years – even decades. An antique appraiser and dealer needs to be versatile, with know-how in just about everything, he said.

“You can’t be one-dimensional in the antique business or you will fail,” he said today.

While Stelmach has a general knowledge of all kinds of antiques, he said he specializes in guns, coins and rugs.

This Saturday, Stelmach and another antique dealer, Mark Christopher of Dream Speaker Antiques, will have an antique appraisal fair at Tillman’s Village Inn at the corner of Ridge Road and Route 98. The event from 10 a.m. to 3 p.m. is a benefit for the Cobblestone Society and Museum. (Click here for more information.)

Stelmach encourages people to not throw away things that might seem like junk until they have an antiques professional take a look. He said there may be unexpected treasures in the attic. Some old Levi’s jeans from the early 1970s are worth $500 to $1,000, for example.

Some people stash away old pocketwatches, coins, pottery, furniture, even beer bottles that may jump in value over the years.

He does a few antique appraisal fairs each year, with shows in the Adirondacks and Massachusetts. Stelmach is a former trustee for the Cobblestone Museum. He wanted to do a local event to support the museum.

“People really just want to know and understand what it is,” he said about some of the items discovered in houses and garages.

Stelmach sells all kinds of stuff, from old bikes (ones with banana seats are popular) to paintings from untrained artists. Chinese porcelains “are really hot right now,” and vinyl records are making a comeback.

Among his vast collection, Stelmach said three pairs of clown shoes are among his favorite. “They’re very rare,” he said about the shoes. “Most clowns are buried with their shoes.”

His collection of taxidermied animals include polar bears, caribou, moose, bison and a giant tuna.

“Anything is collectable,” he said. “You never know what people will collect.”

The antiques business is a tough one, especially in this part of the state. The market is depressed around Orleans County. Stelmach sells many of his antiques out of the area.

The biggest factor making antiques a challenging business, though, may be changing demographics. Stelmach said younger adults, ages 45 and under, prefer homes with less stuff.

“People don’t collect as much as they used to,” he said.

But he said the market is always changing. He thinks there will be a resurgence even among younger adults for antiques, for items that aren’t mass produced and cheaply made.

“We live in such a throw-away society right now,” Stelmach said.

He welcomed people to bring in items on Saturday, from original art to household furnishings (pictures of a bed or dresser would suffice).

“The crazier, unusual stuff, the better,” he said. “I’m good at knowing what things are.”

Your ticket for the: Long-time antiques dealer sees value in items from yesteryear