The Cobblestone Museum > Our History

The Cobblestone Museum is a National Historic Landmark rooted in the history of cobblestone masonry
and committed to the preservation and promotion of Western New York history, art, and culture
through:
• Inspirational and transformational interactions with visitors that foster curiosity about the past.
• Meaningful partnerships that engage diverse groups and organizations throughout our community.
• Responsible stewardship of our historic treasurers to ensure our past is secured for the enjoyment of
future generations.

The Cobblestone Museum is an asset that will add value and vitality by preserving and
promoting the rich historic, artistic, and cultural resources of Western New York. We will
accomplish this by:
• Creating a unique visitor experience that promotes inquiry while establishing the relevance
and context of local history;
• Encouraging growth through community partnerships and continued engagement of young
professionals;
• Continuing to protect and share our beautiful historic treasures through responsible
stewardship.

About The Cobblestone Museum

Established in 1960 to preserve the Cobblestone Universalist Church and District No. 5 Schoolhouse in Childs, NY. The Cobblestone Society and Museum has existed for over 50 years as the nation’s destination for everything “cobblestone.” The society owes its origins to a steadfast and determined group of individuals who desired to study and preserve a unique piece of history, situated largely amongst the landscape of Western New York.

The idea for a museum centered in Childs, NY, was hatched out of the mind of Robert Frasch in June of 1960. As a history teacher in Hilton, NY, Frasch often wondered about the history behind these interesting structures located along his path to work. In the summer of 1960, he pitched the idea to Orleans County Historian, Cary H. Lattin, who quickly became a stalwart supporter of the project. Soon after, Frasch had gained the support of other key members of the community including the Town of Gaines Historian, J. Howard Pratt, and Albion’s Town Historian, Katherine Billings. 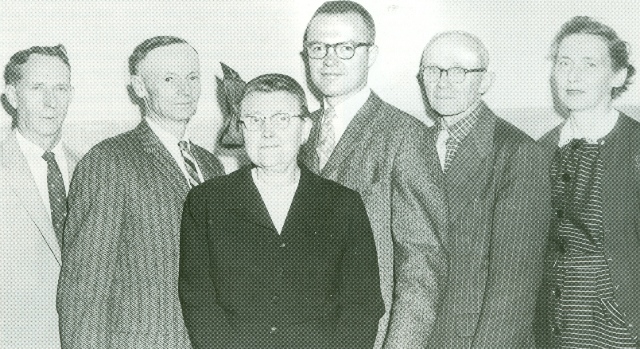 The first slate of officers was presented to the newly formed group by Cary Lattin: Robert Frasch, Chairman; Maurice Wilson, Vice Chairman; Katherine Billings, Secretary; Hannah Thompson, Treasurer. In addition, a board of 10 members was also offered including: Homer Brown, John Brush, Mrs. Richard Canuteson, Mrs. E. Earl Harding, Cary Lattin, Curtis Lyman, Curtis Murray, J. Howard Pratt, Carl Schmidt, and Ora Woodcook. The slate passed and the membership dues were set at $.50 for students, $2.00 for annual, $25.00 for patron, and $100.00 for life. Billings wrote in the minutes, “After two enthusiastic hours in the cold, unheated church the meeting was adjourned.”

The Cobblestone Museum has gone through considerable expansion since its formation in 1960. The museum added their third cobblestone building in 1975 with the purchase of the Ward House. Over the following two decades the museum acquired, through donation, four wooden structures now situated on a parcel of land given to the museum by Mrs. Nellie Vagg. The purchase of the brick house adjacent to the church finally gave the museum space to expand their resource center.

Now, the museum serves as the central museum for Orleans County, promoting the heritage and history of cobblestone structures while preserving the history of the county itself. The museum is home to numerous artifacts, significant to Orleans County and New York State history.

Decorated in Victorian fashion, the Cobblestone Church, Ward House, and Schoolhouse provide visitors with a look into the lives of those who lived during the later half of the 19th century. Our four wood structures contain artifacts relating to the history and development of agriculture and skilled trades in Western New York. The Farmer’s Hall gives visitors the opportunity to see rare and unique agricultural tools and implements used throughout the area. The Print Shop, Harness Shop, and Blacksmith Shop are all reminiscent of the working environment of the later 19th century skilled tradesman.

In 1834 under the direction of John Proctor, the Universalist Church at Fairhaven is constructed in one season. The building serves the congregation for just over 60 years when the Pullman Memorial Church is finally dedicated at Albion.

Starting in 1836 under the supervision of John Proctor, the Ward House is constructed as a parsonage for the neighboring Universalist Church. After two decades, the property is sold to private owners.

The District No. 5 Schoolhouse is completed in 1849 under the supervision of William Babbitt, Esq. This building replaces the log schoolhouse constructed to the east of the current site.

In 1960, Robert Frasch leads efforts to establish the Cobblestone Society in hopes of saving the oldest cobblestone church in North America. The school is purchased in 1960 and the church finally transferred to the society in 1961.

In 2010 the Cobblestone Society sees the passing of two major milestones, the 50th anniversary of the founding of the organization and the retirement of C. W. Lattin, the Society’s first Director and Curator after 40 years.

Your ticket for the: Our History