January 29, 2020
No comments yet
Uncategorized

Each year at our Membership Dinner, we feature many exciting items in the live auction held at the event. One such item in this year’s auction is the beautiful grandfather clock pictured above.

This large grandfather clock was built in 1999 by the Sligh Clock Company in Zeeland Michigan. The mechanical clock works are German made by Hermle (model number 2061-853). The clock strikes the hour and chimes choice of three tunes (Westminster, St. Michael and Whittington) on the quarter, half, three quarter, and hour. It also has a silent running mode that will silence the chimes and strike. The clock has a moon dial that tracks the moon phases. Each of the cable run weights power one mechanical function in the clock, one for time and moon phase, one for the hour strike and one for the chimes. The clock works were cleaned and repaired by the “A Clock Repair Store” of Rochester on March 2019.

The Sligh Furniture Company was founded by Charles R Sligh in 1880 in Grand Rapids, Michigan. He pioneered the idea of producing matching moderately priced bedroom furniture in suites as opposed to the then current practice of one company specializing in beds, another dressers, and so on. The company was very successful, in 1927, it was the largest manufacturer of bedroom furniture in the world, employing nearly 1,500 workers.

Mr. Sligh had a profound sense of civic and industry responsibility. He ran for governor of the State of Michigan in 1896; was a member of the commission which drafted the first Workman’s Compensation Act for Michigan in 1912; and was elected to the Michigan State Senate in 1922. He was president of the Grand Rapids and National Furniture Manufacturers Associations.

Unfortunately, the company ran in to financial trouble in the great depression and closed in 1932. The successor company the “The Charles R. Sligh Co” was started by Charles R Sligh Jr. and O.W. Lowry. Both former executives of the Sligh Furniture Co. Their new company was opened in Holland, Michigan with only 45 employees, in a deliberate attempt to operate a smaller, leaner company. Charles R Sligh Jr served as president of the Grand Rapids Furniture Manufactures Association and the Grand Rapids Furniture Makers Guild
The Sligh Furniture Company began making clocks with through acquiring the Trend Clock Company in 1968 and made fine clocks until 2005 when the division was sold. The rest of the Sligh Furniture was acquired in 2011 by Lexington Home Brands, they still use the Sligh name as a brand.

Hermle Clocks is a German family owned and operated company, founded in 1922 in Gosheim in southern Germany by Franz Hermle and his sons.
Within ten years the company became known as one of the most modern and efficient manufacturers of clock movements in the clock industry. Franz Hermle and his sons’ dedication weathered the effects of WWII. The founder, Franz Hermle, died in 1953 and left a modern and prosperous operation to his sons Gebhard, Alfred, Hans and Heinrich Hermle.

Now in its third generation, “Franz Hermle and Sohn” employs over 500 people in 4 locations in Germany and an additional manufacturing facility, Hermle Black Forest Clocks, in Amherst, Virginia, USA.

The lucky bidder at the Membership Dinner will win the Sligh Clock which includes professional set up in your home. The clock has been donated by Kim Charron of Kent. 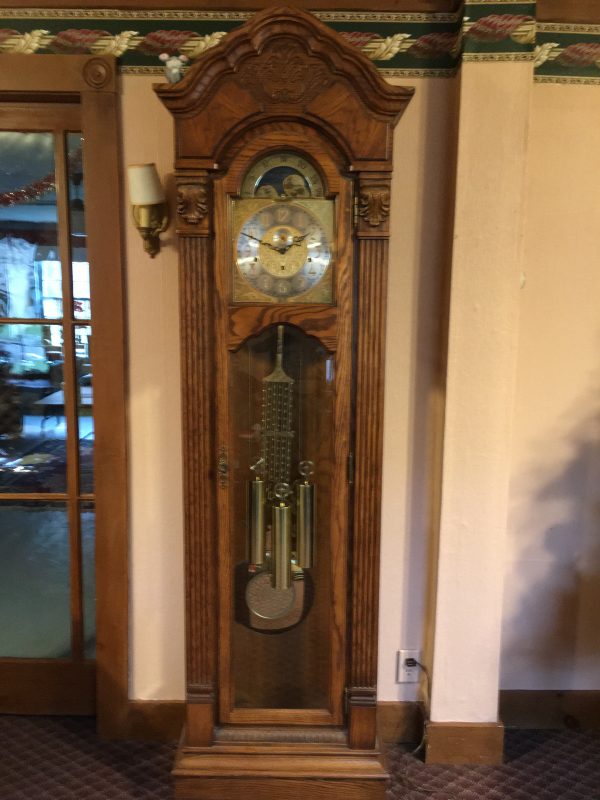 Your ticket for the: Sligh Grandfather Clock Featured in Auction