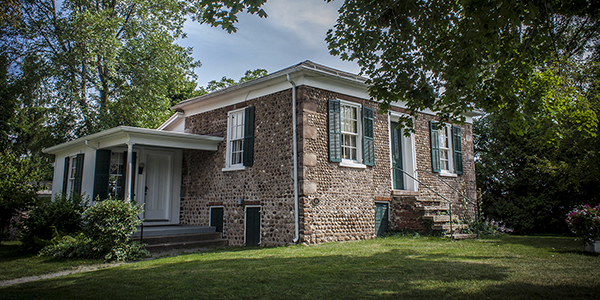 No written records survive regarding the Ward House; however it is believed to have been constructed around 1840 under the direction of John Proctor. What is known is that the property remained under Proctor’s ownership until 1861 and was likely intended to serve as a parsonage for the church.

The house was constructed in the Federal style with a hipped roof; the raised basement level gives the impression of a split-levelesque bottom floor. The original house was an 18′ x 24′ structure built of fieldstones set in the Gaines Pattern; the quoins were cut from local sandstone. An extension was added to the north side of the house in the late 19th century, sided with vertical tongue and groove, and the porch supported with a fluted Colonial Revival column. The front door is in the Italianate style with cut glass windows, but is not original to the house. The interior is decorated to reflect the 1880s.

Following John Proctor’s ownership, the house was sold to Benjamin and Mary Ann Woodburn Dwinnell. Mary Anne was the aunt of New York Tribune editor Horace Greeley, who held the mortgage until 1863. The home functioned as a private residence until 1975, when the property was purchased by the museum from Mrs. Inez Martyn Ward.