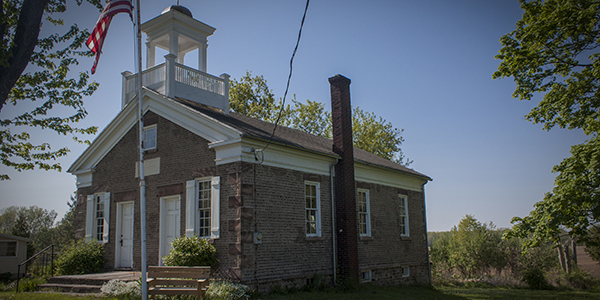 The parcel of land on which the cobblestone schoolhouse sits was purchased by John Proctor in 1847 for $50. Under the supervision of William Jenks Babbitt, the building was completed in 1849. Constructed in the Greek Revival style, the District No. 5 Schoolhouse is a wood-framed structure with a lake-washed stone veneer. The walls are approximately 10″ thick, which is roughly 8″ to 14″ thinner than most cobblestone buildings. An elaborate cupola holds the school’s bell, which was donated by William Babbit after construction was finished.

On the front, stones are set at four courses per quoin, while the sides and rear of the building are set with three courses per quoin. A sandstone water table sits atop the foundation, and the lintels, sills, and quoins are all cut from local sandstone. A portion of the northwest corner of the schoolhouse was repaired using bricks.

Visitors will notice the presence of two doors on the front of the building; atypical of most one-room schoolhouses. Through each door was a separate cloakroom, the west door for boys, and the east door for girls. Later, pupils entered through one door and the right cloakroom was converted into a teacher’s office and library. The building was once heated by a central stove, but was later replaced by a basement furnace.

The cobblestone schoolhouse served District No. 5 for 103 years before it was closed in 1952 after the centralization of Albion’s school district. In 1961, it was sold to the Cobblestone Society Museum for $129. Volunteers re-shingled the roof, repainted the exterior woodwork, built additional desks to duplicate original pieces within the building, and worked to furnish the schoolhouse with period items. In 2004, the belfry was restored to its pre-1930s design.