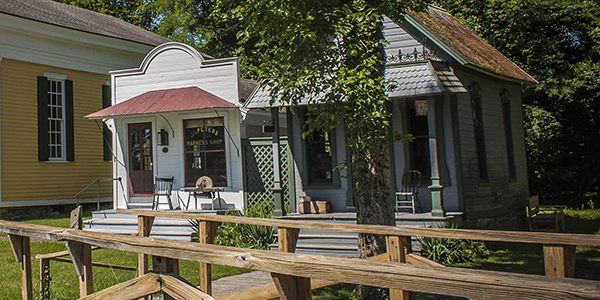 This building was constructed in 1838 by Starr Chester, a cobbler from Gaines, serving as his shop until 1880. Three years later on May 21, 1883, the building was purchased by Gates Knickerbocker, a local jeweler, who moved the building 300 feet to a new location and used it for a watch, clock, and jewelry shop; he paid $30.00 for the building. It was during his ownership that the “Western Style facade” was added. He used the building up until his death in 1914.

This building is peculiar in its use of lime mortar stucco over hand-split lathe. This sort of method would have been unusual for the early 19th century, and a rare method of construction in New York.

In 1922 it was purchased by Clifton Nestle and used as a gun and paint shop until 1939, when Floyd Berns purchased it to be used as a paint shop. In 1927, it was given to the museum by Rose M. Welles and was moved to its current location thanks to the generosity of Rice Homes, Inc. In the 1980s, the building was restored to its 1880s appearance. It now houses artifacts once used by John G. Peters, a local harness maker and cobbler from Lyndonville.