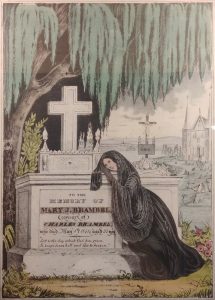 Mourning art was not a phenomenon that was unique to the Victorian era, but it is an understatement to say that the genre flourished in that time period. The Victorians were obsessed with death, and the mourning art that they left behind is a testament to that. Cobblestone’s new exhibit, “Manufactured Mourning Art,” is available for viewing in the Proctor Room and shows a few of the many ways Victorians memorialized their loved ones as the industrial age was beginning.

With the development of assembly lines in the 1800s, printing companies began to mass produce hand colored lithographs depicting grieving mothers, the loss of a beloved family pet, and even the deaths of popes and presidents. Presidents were especially memorialized, and as three presidents were assassinated between 1865 and 1901 there were a litany of knick knacks, plates, prints, and other mass produced chotchkies to memorialize Lincoln, Garfield, and McKinley. Parlors, kitchens, living rooms all over the country were filled with these prints depicting death and the mourning process; death was not only an accepted part of life, it was an ever-present part of life.

As our society has become less infatuated with mortality, much of the symbolism surrounding mourning has been rendered obsolete or forgotten. The Proctor Room exhibit shows some of the symbols that were ubiquitous with death and commonly reproduced in mourning art: the anchor (representing hope), a weeping willow (representing sorrow), the urn, a pillow (representing eternal rest), and other symbols were used to remind people of the deceased and the afterlife.
If you’re interested in learning more about the mourning art exhibit, a virtual tour of the exhibit has been posted on our Facebook page. 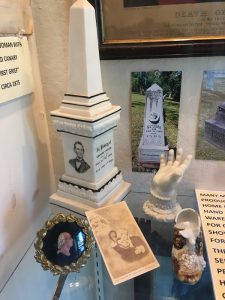 Your ticket for the: Mourning Art Exhibit